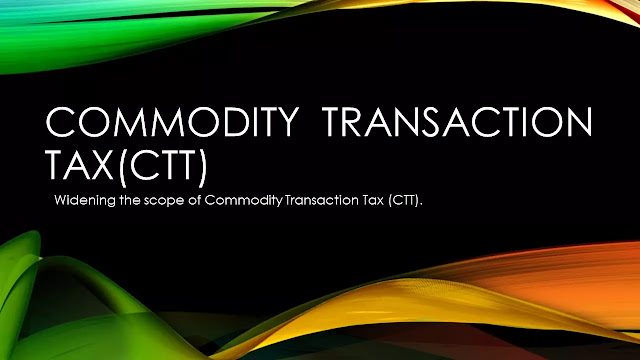 The Finance Act, 2013 had introduced Commodities Transaction Tax (CTT) on the sale of commodity derivatives based on non-agricultural commodities traded in recognised associations. The intention behind introducing CTT was to bring parity between the derivative trading in the securities market and the commodity market. The CTT was levied at the rate of 0.01%, which was also the rate of Securities Transaction Tax (STT) levied on sale of ‘futures’ (a contract, which derives its value from an underlying asset and is settled by physical delivery) in securities. Subsequently, the scope of CTT was expanded vide the Finance Act, 2018 by also including the sale of options on commodity derivatives as taxable commodity transactions.
Trading in derivatives including commodity derivatives is regulated by the Securities Contract (Regulation) Act, 1956 (SCRA). Prior to 2015, derivative trading in commodities was regulated by the Forward Markets Commission (FMC) under the Forward Contracts (Regulation) Act, 1952 (FCRA). In 2015, the FCRA was repealed and the FMC was merged with the SEBI. As a result, the recognised associations defined in the FCRA were replaced by the recognised stock exchange defined in the SCRA. Subsequently, the scope of “commodity derivatives” was expanded vide notification dated 27th September, 2016, which notified a number of goods for the purpose of its definition in clause (bc) of section 2 of the SCRA. These goods included cereals and pulses, oil seeds/ oil cakes and oils, spices, metals, precious metals, gem and stones, fibres, energy, sweeteners, plantation, dry fruits and others.
Presently, as per SCRA regulations, derivative trading in commodities is limited only to commodity ‘futures’ and ‘option on commodity futures’. The underlying asset in the ‘option on commodity futures’ is a ‘commodity future’. This means that upon expiry, if the ‘option’ is exercised, the option-holder gets a right to buy or sell a ‘commodity future’ and not the right to buy or sell the goods directly. However, vide notification dated 18th October, 2019, ‘option in goods’ has also been included in the definition of ‘derivatives’ in clause (ac) of section 2 of the SCRA. This has paved the way for new derivative product ‘options in goods’ with goods notified on 27.09.2016 directly as the underlying asset. Moreover, ‘commodity futures’ based on prices or indices of prices of ‘commodity futures’ is also likely to be introduced as a new product in the commodity derivative market.
Advertisement