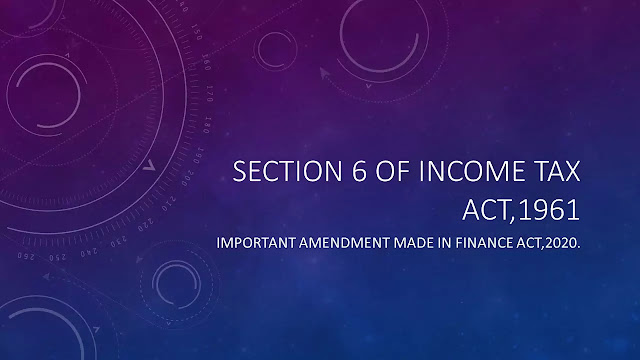 Instances have come to notice where period of 182 days specified in respect of an Indian citizen or person of Indian origin visiting India during the year, is being misused. Individuals, who are actually carrying out substantial economic activities from India, manage their period of stay in India, so as to remain a non-resident in perpetuity and not be required to declare their global income in India.

Sub-section (6) of the said section provides for situations in which a person shall be “not ordinarily resident” in a previous year. Clause (a) thereof provides that if the person is an individual who has been non-resident in nine out of the ten previous years preceding that year, or has during the seven previous years preceding that year been in India for an overall period of 729 days or less. Clause (b) thereof contains similar provision for the HUF.
This category of persons has been carved out essentially to ensure that a non-resident is not suddenly faced with the compliance requirement of a resident, merely because he spends more than specified number of days in India during a particular year. The conditions specified in the present law in respect of this carve out have been the subject matter of disputes, amendments and further disputes. Further, due to reduction in number of days, as proposed, for visiting Indian citizen or person of Indian origin, there would be need for relaxation in the conditions.
Advertisement
The issue of stateless persons has been bothering the tax world for quite some time. It is entirely possible for an individual to arrange his affairs in such a fashion that he is not liable to tax in any country or jurisdiction during a year. This arrangement is typically employed by high net worth individuals (HNWI) to avoid paying taxes to any country/ jurisdiction on income they earn. Tax laws should not encourage a situation where a person is not liable to tax in any country. The current rules governing tax residence make it possible for HNWIs and other individuals, who may be Indian citizen to not to be liable for tax anywhere in the world. Such a circumstance is certainly not desirable; particularly in the light of current development in the global tax environment where avenues for double non-taxation are being systematically closed.

In the light of above, it is proposed that-
(i) the exception provided in clause (b) of Explanation 1 of sub-section (1) to section 6 for visiting India in that year be decreased to 120 days from existing 182 days.
(ii) an individual or an HUF shall be said to be “not ordinarily resident” in India in a previous year, if the individual or the manager of the HUF has been a non-resident in India in seven out of ten previous years preceding that year. This new condition to replace the existing conditions in clauses (a) and (b) of sub-section (6) of section 6.

In short,an individual or HUF will be ordinarily resident if he is resident in 4 out of 10 previous years preceding that year.

(iii) an Indian citizen who is not liable to tax in any other country or territory shall be deemed to be resident in India.

This amendment will take effect from 1st April, 2021 and will, accordingly, apply in relation to the assessment year  2021-22 and subsequent assessment years.