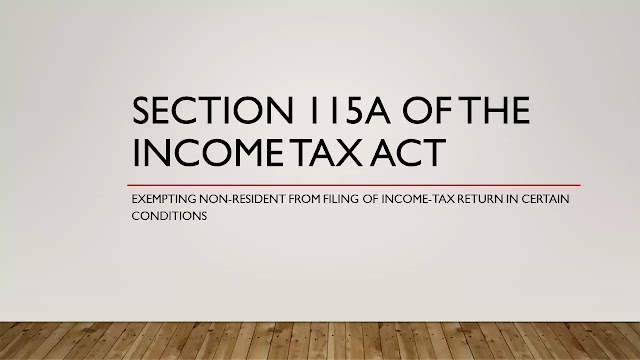 Section 115A of the Act provides for the determination of tax for a non-resident whose total income consists of:
(a) certain dividend or interest income;
(b) royalty or fees for technical services (FTS) received from the Government or Indian concern in pursuance of an agreement made after 31st March 1976, and which is not effectively connected with a PE, if any, of the  non-resident in India.
Sub-section (5) of said section provides that a non-resident is not required to furnish its return of income under  sub-section (1) of section 139 of the Act, if its total income, consists only of certain dividend or interest income and the TDS on such income has been deducted according to the provisions of Chapter XVII-B of the Act.
While, the current provisions of section 115A of the Act provide relief to non-residents from filing of return of income where the non-resident is not liable to pay tax other than the TDS which has been deducted on the dividend or interest income, the same relief has not been extended to non-residents whose total income consists only of the income by way of royalty or FTS of the nature as mentioned in point (b) above.
Advertisement

Therefore, it is proposed to amend section 115A of the Act in order to provide that a non-resident, shall not be required to file return of income under sub-section (1) of section 139 of the Act if, –

(ii)  the TDS on such income has been deducted under the provisions of Chapter XVII-B of the Act at the rates which are not lower than the prescribed rates under sub-section (1) of section 115A.
This amendment will take effect from 1st April, 2020 and will, accordingly, apply in relation to the assessment year  2020-21 and subsequent assessment years.
Advertisement