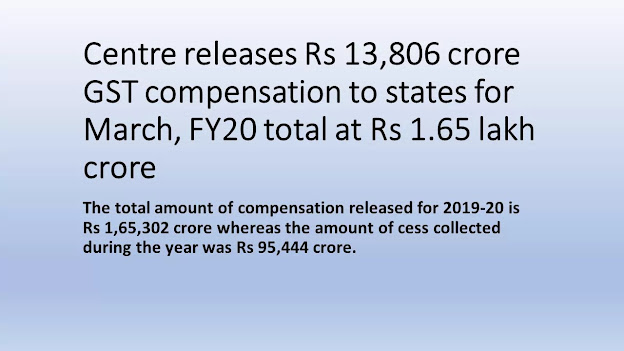 The Centre has released over Rs 1.65 lakh crore as GST compensation to states for 2019-20 financial year, including Rs 13,806 crore for March, the Finance Ministry said on Monday.

“The central government has recently released GST compensation of Rs 13,806 crore to states for March’2020. Taking this amount into account, entire compensation up to 2019-20 has been released to states,” the Ministry said in a statement.

In addition, the Centre had transferred Rs 33,412 crore from Consolidated Fund of India to the Compensation Fund as part of an exercise to apportion balance of Integrated GST (IGST) pertaining to 2017-18, it said.

Under the Goods and Services Tax (GST) law, states were guaranteed to be paid for any loss of revenue in the first five years of the GST implementation from July 1, 2017. The shortfall is calculated assuming a 14% annual growth in GST collections by states over the base year of 2015-16.

Under the GST structure, taxes are levied under 5, 12, 18 and 28 % slabs. On top of the highest tax slab, a cess is levied on luxury, sin and demerit goods and the proceeds from the same are used to compensate states for any revenue loss.