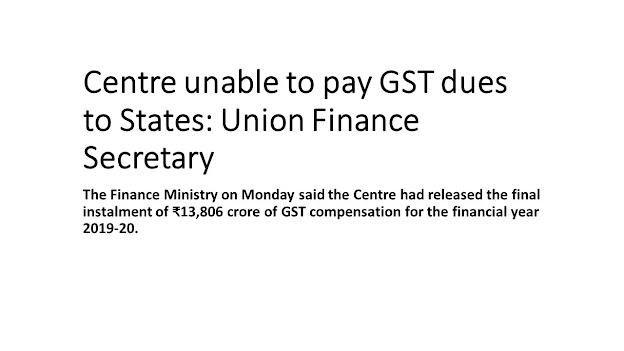 Finance Secretary Ajay Bhushan Pandey told the Parliamentary Standing Committee on Finance, headed by BJP MP Jayant Sinha, at a meeting on Tuesday that the government is in no position to pay the GST share of States as per the current revenue sharing formula, sources said.

According to at least two members who attended the meeting, Mr. Pandey’s comments were in response to a question on the revenue shortfall due to the pandemic. The members then questioned him on how the government could renege on the commitment to the States. At this, “he [Mr. Pandey] pointed out that the GST Act has provisions to rework the formula for paying compensation to the State governments if the revenue collection drops below a certain threshold,” one of the members said on condition of anonymity.

The Finance Ministry on Monday said the Centre had released the final instalment of ₹13,806 crore of GST compensation for the financial year 2019-20.

Also Read: Initiatives of the Committee for Members in Practice (CMP), ICAI

The GST Council was scheduled to meet in July to try and work out the formula to rework the compensation to the States. However, the meeting has not been convened so far.

The opposition members meanwhile were up in arms, as the committee which was meeting for the first time since the nationwide lockdown instead of discussing the State of Indian economy, took up the topic “Financing the innovation ecosystem and India’s growth companies”.

Congress MPs Manish Tewari, Ambika Soni, Gaurav Gogoi and NCP MP Praful Patel, according to sources, vociferously, demanded that the Committee discuss the current state of economy which has suffered a huge set back because of the pandemic. Mr. Tewari in a letter to Chairperson, Mr. Sinha, had earlier pointed out that the people will consider the Committee to be “delusional” to discuss the chosen topic in a hour of crisis.

According to sources, Mr. Tewari pointed out that even the Budget passed by Parliament on March 23 may no longer be relevant since it was based on certain assumptions about the revenue collections. There is no clarity so far from the government on overall revenue shortfall, he pointed out. Congress MP Gaurav Gogoi said the panel must also scrutinise the efficacy of the government’s rescue package.

It is learnt that Mr. Sinha, the Committee Chairperson, said most of the questions posed by the members were political in nature and cannot be answered by Finance Ministry officials. These can only be replied to by Finance Minister Nirmala Sitharaman and can be taken up when Parliament meets during debates on the subject. in either houses of Parliament.

To this Mr. Praful Patel said if the Standing Committee on Finance cannot discuss even the basic question of the state of economy, then it is better to disband the panel, sources added.