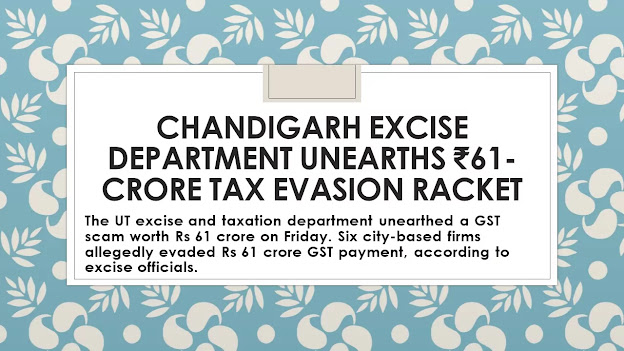 Acting on a specific input, six teams were constituted to conduct searches at several premises of these firms on Friday.

These firms deal in pipes, tiles, etc. and evaded Rs 61 crore GST payment. “The investigation conducted so far has revealed that these dealers did not pay GST to the government and facilitated illicit input tax credit (ITC) entitlement. All the firms have not filed their GSTR-3B monthly tax returns from February onward,” said Chaudhary.

“The premises of five firms were found closed and it has come to the fore that no such firms exist at the given addresses. Only M/s SR Agencies premises was located from where all other firms operated,” added Chaudhary.

Preliminary investigations revealed that firms generated e-way bills using motorcycles, three-wheelers, and even ambulance for showing transportation of goods. Some incriminating documents of the firms have been taken into possession. The investigation is underway as the department suspects the involvement of other firms in the racket.