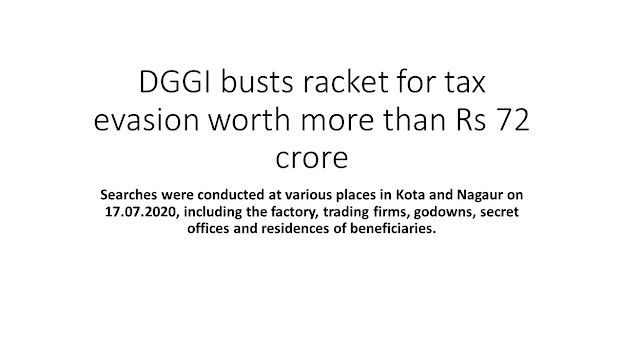 Acting on specific intelligence the Directorate General of Goods and Service Tax Intelligence, Headquarters (DGGI, Hqrs) has unveiled a racket of clandestine clearance of cigarettes through a factory run in Kota.

Searches were conducted at various places in Kota and Nagaur on 17.07.2020, including the factory, trading firms, godowns, secret offices and residences of beneficiaries. During the search, incriminating documents and electronic devices pertaining to the supply of cigarettes without payment of taxes and duties were recovered. Preliminary investigation in the case has revealed the evasion of tax of more than Rs. 72 crores till now. The data from the seized documents has revealed that the supply of cigarettes was being carrying even during the lockdown period.

Further investigation, in the case, is still under process.