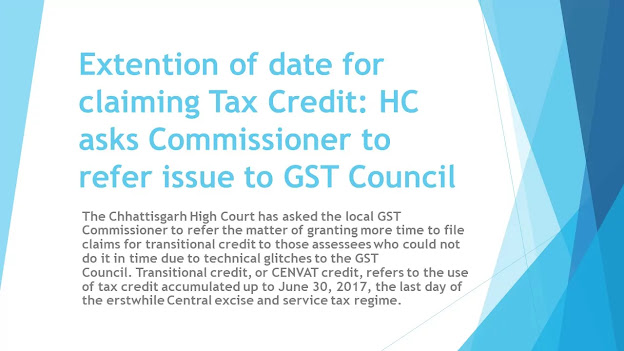 The Chhattisgarh High Court has asked the local GST Commissioner to refer the matter of granting more time to file claims for transitional credit to those assessees who could not do it in time due to technical glitches to the GST Council. Transitional credit, or CENVAT credit, refers to the use of tax credit accumulated up to June 30, 2017, the last day of the erstwhile Central excise and service tax regime.

Under the GST law, Section 117(1)A, the GST Council has been empowered to extend the date for submission of the declaration electronically in Form GST TRAN-1 for those persons who could not submit it by the due date on account of technical difficulties on the portal.

In a petition, petitioner Dhamtari Krishi Kendra said he tried to file a claim for CENVAT credit before the due date of December 27, 2017, but could not do so because of technical glitches. Immediately, he reported the matter to the tax department. He subsequently submitted the return manually in January 2018 and also sent a copy through the post. Both were not accepted by the department which made him approach the high court. The court subsequently asked him to approach the Nodal Officer. He, however, was denied permission to submit the claim. So, he went back to court.

The court took note of elements that Tax Commissioner overlooked. These include proofs supporting the petitioner’s claim of not able to file the return due to a technical glitch, the submission of the complaint before the due date, and submission of the form manually and also through the post within three weeks from the due date. “Accordingly, this court remits the matter back to the Commissioner, Commercial Tax, for reconsideration and for the passing of a fresh order,” the ruling said while adding he/she should keep all the documents submitted by the petitioner in the mind and decide within 60 days.

If required, the Commissioner can refer the matter to the GST Council, the court said.

Divakar Vijayasarathy, Founder and Managing Partner of DVS Advisors LLP, said the decision highlights the apathy in the system which refuses to be tax-payer friendly. “As much as we need to respect law, circumstances like these need to be viewed from the spirit rather than the letter alone. Further inability to comply with for reasons beyond the control of the tax payer should always be viewed from a benign perspective.

“With a legal system which is saddled with a huge backlog and an archaic executive framework, the country needs significant reforms to get anywhere close to our ambition of being business friendly,” he said.