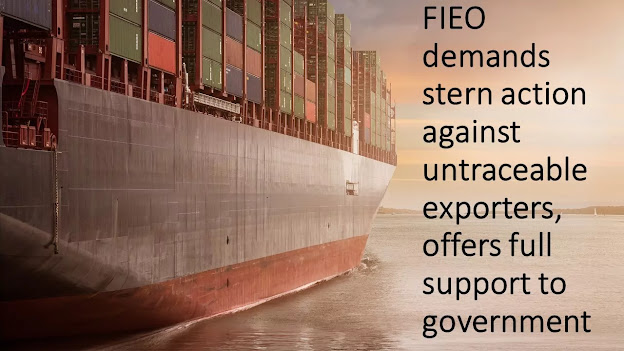 Exporters body FIEO on Saturday demanded a stern action against 1,377 exporters who had claimed GST tax refunds of Rs 1,875 crore and are untraceable at their principal place of business.

The Federation of Indian Export Organisations (FIEO) president Sharad Kumar Saraf said that they would offer full support to the government as such activities impact the image of the exporting community.

“We request you to provide the details of 1,377 untraceable exporters to the ministry of commerce so as to further verify on the basis of information available. If they are not traceable, the DGFT (Directorate General of Foreign Trade) should initiate action to suspend/cancel their IEC (import-export code) making them ineligible for further exports/imports,” Saraf said in a letter to finance minister Nirmala Sitharaman.

According to an official, 1,377 exporters had claimed GST (Goods and Services Tax) tax refunds of Rs 1,875 crore and were untraceable at their principal place of business in a massive verification exercise the government initiated after identifying 7,516 “risky exporters”. Exporters are identified as “risky” on the basis of specific risk indicators based on customs, GST, income tax and DGFT data. The identified risky exporters’ information is shared with the CGST formations for physical and financial verification.

According to trade experts, many exporters have stated that they have been categorised as “risky” as their suppliers or subsuppliers have not deposited the GST.

“How long an exporter can go to check credentials of their suppliers. CGST Act provides for ratings of suppliers and such errant suppliers should have either been given a low rating or black listed forewarning exporters. Unfortunately, this has not been done in the last three years adding to exporters’ problems and pushing them into a risky tag,”

Saraf said that while the number of untraceable exporters as a percentage of total number of exporters is not much yet untraceability of such a large number of businesses requires concerted efforts to trace them and bring them to books. “Every exporter has a PAN and a bank account before he/she applies for IEC. For opening the bank account, necessary KYC is done by banks also besides introduction of account by another customer.

The DGFT also keeps their email, telephone and bank details including the photograph of the person who applies for IEC. Exporters are also required to have GST registration providing email and mobile number, which is cross verified through electronic mode. The registration of exporters is also done at Customs and bank details are captured in which IGST amount is credited,” he said. He added that these exporters may also be members of some export promotion councils/authorities/commodity boards which can help in providing necessary information.

“We need to pool the information available, with all the agencies to locate them as a few black sheep should not dent the image of genuine exporters of the country, Saraf said. He said that the government should further proceed in the matter by immediately issuing them suitable show cause notices. “If they do not respond, DGFT should initiate action to suspend/cancel their IEC making them ineligible for further exports/imports and authorities should initiate proceedings against them to recover government money,” he added.