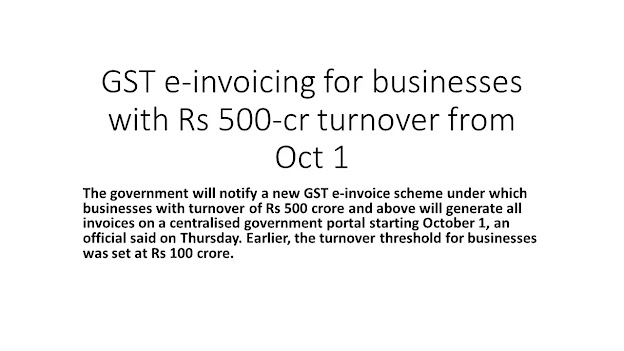 The government will notify a new GST e-invoice scheme under which businesses with turnover of Rs 500 crore and above will generate all invoices on a centralised government portal starting October 1, an official said on Thursday. Earlier, the turnover threshold for businesses was set at Rs 100 crore.

“Yesterday, the GST Implementation Committee has recommended that we will go ahead with October 1 deadline (for e-invoice)… To begin with, we will not do it for Rs 100 crore and above, as we had notified. We will soon come out with a notification to make it Rs 500 crore from October 1 and as they stabilise, we will bring a date for Rs 100 crore turnover people,” Garg said at an Assocham event here.

The new turnover threshold would be notified by next week, he added. The e-invoice was aimed at curbing GST evasion through the issue of fake invoices. Besides, it would make the returns filing process simpler for businesses as invoice data would already be captured by a centralised portal. In November last year, the government had said that from April 1 electronic invoice (e-invoice) would be mandatory for businesses with a turnover of Rs 100 crore. Later in March 2020, the GST Council extended the implementation date to October 1.

The Council also exempted insurance, banking, financial institutions, NBFCs and passenger transport service from issuing e-invoice. It had also decided to introduce the new GST returns ling system in phases between October 2020 and January 2021. Garg said in the last 3 years of GST, there has not been a single month which saw returns being led by all the businesses registered under GST.

About 70-80 percent of GST registered businesses file returns within the due date. “2019-20 has been a year of consolidation of compliance requirement…. We took a call that instead of introducing the new return system which we had promised, we will carry out improvement in the existing return system and take it closer to what we had promised in the new return system to make the certainty of credit,” he said. Garg said the GST administration is working on a proposal to make a system available to businesses about how much input tax credit (ITC) is available with a taxpayer.

“The endeavour is to make life simpler for taxpayer. The vision for the 4th year of GST is compliance burden gets reduced and e-invoice would help in this,” he said. With regard to GST audits, Garg said central tax officers have been training state officers on the audit experience, some of the states had some good strategies which we are working on. “To the extent possible these are not going to be physical audits, these are more going to be desk audits,” he added.