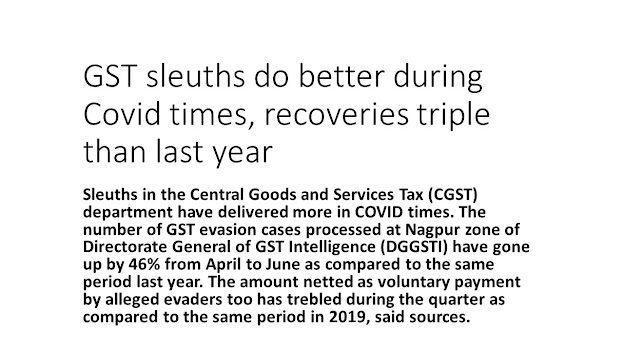 Sleuths in the Central Goods and Services Tax (CGST) department have delivered more in COVID times. The number of GST evasion cases processed at Nagpur zone of Directorate General of GST Intelligence (DGGSTI) have gone up by 46% from April to June as compared to the same period last year. The amount netted as voluntary payment by alleged evaders too has trebled during the quarter as compared to the same period in 2019, said sources.

Sporting PPEs, taxmen have also conducted raids against five business establishments in Nashik and Nagpur. Last year, no cases of fake invoices were registered during this period. As against this, DGGSTI has probed eight cases from April to June in 2020, involving an amount of Rs12 crore, said sources here.

The Nagpur zone covers 24 districts of Maharashtra with offices in the city, Aurangabad and Nashik. Last year, the DGGSTI here had taken up 26 cases of tax evasion, involving default of Rs 71.96 crore from April to June. Out of this the assessees had paid up Rs 68.59 on voluntary basis. This year, it has taken up 46 cases involving an amount of Rs 223 crore and Rs 193 crore has been paid up so far. “As regular investigation and summoning of assessees for questioning is low due to the pandemic, the focus was on finishing old cases. As the load of fresh cases was down, old cases could be processed better, leading to higher tax collection,” said a source in the department.

Fresh investigations have not been given up altogether however. Officials visited offices and factories during raids wearing PPE suits. “The officials are expected to wear suits whenever they visit areas like factories, where they are likely to come across a large number of persons. Each official has been allotted a suit. Though it’s cumbersome to work wearing the suits, its part of the standard operating procedure (SOP) these days,” an official said.

The pandemic has also led to the department moving towards a paperless office. The dependence on physical files has been drastically reduced and within a month the DGGSTI office here is expected to completely shift to electronic mode.

Other procedures like questioning of assessees has slowed down. A designated area has been earmarked for grilling the assessees. Only one person is taken in at a time. Earlier, as many as 5 to 6 persons would be questioned at a time, a source said.

The lower level staff, who are employed on daily wage basis, are now being picked and dropped in department vehicles to do away with the need for using public transport, an officer said.