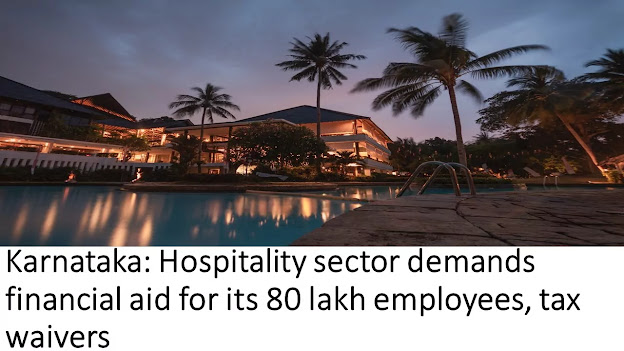 Several reports and inputs have indicated that the novel coronavirus pandemic has devastated the hospitality sector more than most other industries. The situation in Karnataka is no different where closure has driven most hotels out of business in recent months.

While the state government has now permitted hotels to reopen parcel and dine in sections, the business is far from returning to normalcy. Hoteliers in Karnataka are now demanding a financial aid package for their workers.

Industry insiders say that there are around 80 lakh people working in the hospitality sector in Karnataka and each will have to be given Rs 5,000 as financial aid. Hoteliers in the state have also urged the government to waive of excise fee for hotels and bars for a period of one year. Businesses should also be exempted from taxes on electricity and charged only for units consumed, those in the hospitality sector are suggesting.

General Secretary of the Karnataka Hotel Association, Madhukar Shetty said, “I request the government to waive off one years’ worth of excise license fee. Also, the chief minister should instruct the electricity board to bill us only for the electricity consumed.”

With the state itself facing a revenue crunch, the Karnataka government is of the opinion that the hotel industry will have to rely on loans and strengthen themselves in the wake of the pandemic.

Karnataka Deputy CM CN Ashwathnarayan said, “The hotel industry comes under the MSME sector. A package of Rs 20 lakh crores has been given to the sector by the central government. The state is short of revenue inflow but free ration for all is being given. Hotel industry’s demand too will be looked into by the chief minister.”

Opposition leaders in the state have also attacked the Karnataka government for failing to promise any relief to the hotel industry. The Congress has also urged CM BS Yediyurappa to announce financial aid for employees of the hospitality sector.