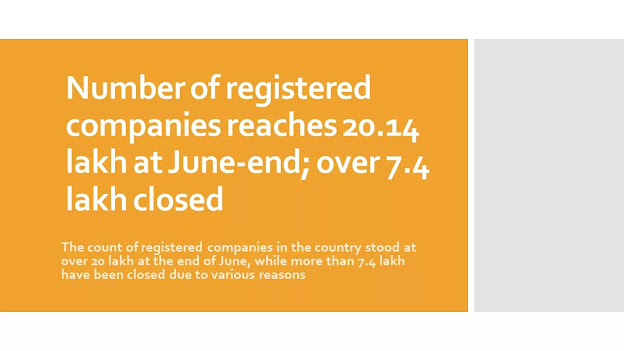 The count of registered companies in the country stood at over 20 lakh at the end of June, while more than 7.4 lakh have been closed due to various reasons, according to official data. The latest data from the corporate affairs ministry also showed that there were little over 12.15 lakh active companies as on June 30. Generally, active companies are those which are regular in making requisite lings to the ministry.

The ministry is implementing the Companies Act as well as the Limited Liability Partnership (LLP) Act. In June alone, a total of 10,954 companies were registered with collective authorised capital of Rs 1,318.89 crore. In terms of economic activities, most companies were in business services at 3,399, followed by manufacturing (2,360), trading (1,499), community, personal and social services (1,411) and construction (644), as per the ministry’s latest monthly information bulletin on the corporate sector.