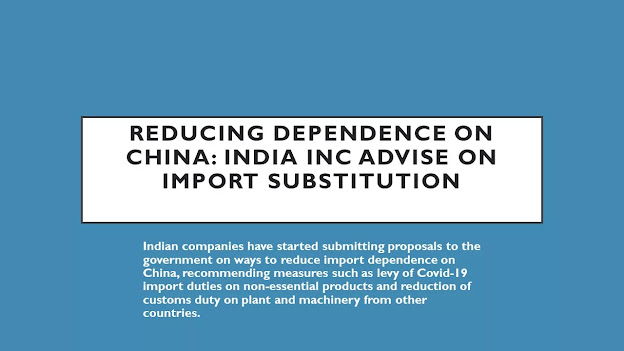 Indian companies have started submitting proposals to the government on ways to reduce import dependence on China, recommending measures such as levy of Covid-19 import duties on non-essential products and reduction of customs duty on plant and machinery from other countries.

“The suggestions include imposing Covid-19 import duties of as much as 15% on non-essential imports across sectors, even for products routed through countries that have free-trade agreements with India,” a senior official told ET. “They also suggested suspension of trade concessions under FTAs, reducing customs duty on plant and machinery imported from Japan, the US and Europe, and making import of raw material very selective.”

Industry associations are making presentations to the government on the basis of inputs received from sectoral bodies. Japan and South Korea have been identied as alternative sources for lithium batteries and other technical components. Companies are using the opportunity to outline steps to cut dependence on all imports.

Global supply chains were disrupted after the Covid-19 outbreak, hurting India’s manufacturers and exporters, and that was followed by border tensions with China that erupted last month. The automobile components industry wants standards to be tightened so that cheap Chinese imports don’t flood India through FTAs, including pacts with the Association for South East Asian Nations and the South Asian Free Trade Area, and it has called for an investigation into the matter.

Citing an example, the auto components industry said imports from Singapore surged more than seven-fold to almost $1 billion in 2018-19 from $124 million in 2017-18. The Indian business community’s detailed suggestions were made after the commerce and industry ministry sought a list of imports from China and ways to discourage them by either incentivising local production or finding alternative sources.

“We have a lot of capability in sectors such as pharmaceuticals, auto and electronics, but we need to build alternative supply chains with partners in the Far East, Europe and the US, as we look to cut our dependence on China,” said Jayant Dasgupta, India’s former ambassador to the orld Trade Organization. However, he said these changes won’t happen overnight and would take at least five years of efforts, considering that China achieved this level of manufacturing capability over 20 years. Sectors ranging from auto to pharmaceuticals, iron & steel, textiles, plastics, furniture and toys are making representations to the government, officials said.

However, there were conicting views on certain items. While the chemicals industry proposed a duty on imports from China, the pharmaceuticals industry opposed the move, saying it would increase their costs and interfere with drugs that are under price control. “The idea of this exercise is to diversify our supply chain we have seen the perils of excessive dependence on one supplying nation,” another senior official told ET.

The cement industry proposed a ban on exports of grade limestone and introducing import duty on cement and clinker. The aluminium alloy and related industry sought a complete review of existing FTAs, including with Asean. Textile companies suggested that the rules of origin should be drafted in such a way that China is not able to push its products to India through Bangladesh.

An outright ban has been proposed on import of petrochemical products where the local industry has the capability of meeting domestic demand and a doubling of import duty has been sought on synthetic bres for which there is more than adequate domestic capacity to meet demand in the country. The PVC ooring industry wants imports through FTAs to be curbed to give a llip to domestic companies and create employment in this labour-intensive sector.

“India should also re-negotiate preferential import duty rates favouring exports from India for PVC products,” officials from the sector have proposed. China accounts for about 14% of India’s imports and is a major supplier for sectors including mobile phones, telecom, power, plastic toys and critical pharma ingredients. India’s trade decit with China narrowed to $48.66 billion in 2019-20 due to lower imports, according to government data, from $53.56 billion in 2018-19 and $63 billion in 2017-18.