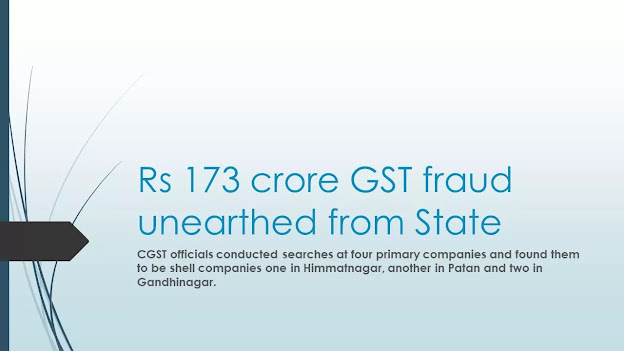 The Preventive Wing of CGST Gandhinagar has unearthed tax fraud amounting to Rs 173 crore through claims of fake Input Tax Credit (ITC) on products. CGST officials conducted searches at four primary companies and found them to be shell companies one in Himmatnagar, another in Patan and two in Gandhinagar.

Officials said that Kalidas Panchal operated V K Enterprises at Sampad, Prantij, in Himmatnagar. But the company was non-existent and set up with false documents. Similarly, Aasif Mehmood Sayyad ran Altra Trading Company at Vavol in Gandhinagar. Amitkumar Vinuprasad Pathak was allegedly running the same scam in via Patel Enterprise in Gandhinagar.

Ahmedabad Customs Commissionerate has found three instances of overvaluation of goods to avail fraudulent IGST refund to the tune of Rs 3.5 crore. In two cases of products going to the Air Cargo Complex, ‘electrical capacitors/washers’ worth Rs 5.57 crore were seized, saving the government Rs 2.12 crore. In another case, ‘ceramic car polish’ worth Rs 7.65 crore was seized at ICD Khodiyar itself and IGST refund worth Rs 1.36 crore was saved.