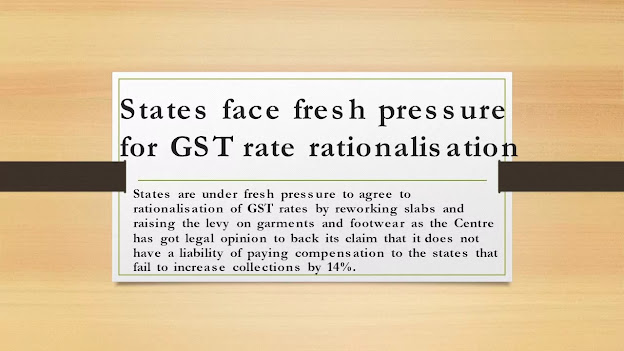 States are under fresh pressure to agree to rationalisation of GST rates by reworking slabs and raising the levy on garments and footwear as the Centre has got legal opinion to back its claim that it does not have a liability of paying compensation to the states that fail to increase collections by 14%.

While officials at the Centre and the states have maintained this argument for months, last winter, state finance ministers had opposed any attempt to rationalise the levies at a meeting of the GST Council. Armed with the attorney general’s opinion, the Centre will once again lob the ball back in the GST Council’s court. The all-powerful panel comprising state and Union finance ministers is scheduled to meet shortly to discuss the issue of compensation, with opposition-ruled states such as Kerala and West Bengal pressing the Centre to bear the burden.

Sources at the Centre argued that the 101st Amendment provides for five-year compensation to the states for “revenue loss” due to implementation of GST. “Revenue loss” has been defined to mean an annual collection growth of 14%, which was based on the higher growth rates seen during earlier years. The GST (Compensation to States) Act, 2017 provides for compensation to be paid from the Compensation Fund, which is to be built through the proceeds of cess and “such other amounts as may be recommended by the Council”.

Also Read: Initiatives of the Committee for Members in Practice (CMP), ICAI

“Obviously, this would mean that it is the GST Council which has to decide on making good the shortfall in the GST Compensation Fund, by providing for sufficient amounts to be credited to it,” argued a source. In fact, Parliament had rejected a proposal to mandate that the Centre pay the compensation gap out of the Consolidated Fund of India.

Sources argued that there are only three options before the Council either increase the compensation cess or its ambit to include more goods and services, or rationalise the rates, or borrow from the market. Sources indicated that the states should borrow, and pay based on future receipts, instead of getting the GST Council to borrow, as was proposed by some FMs.