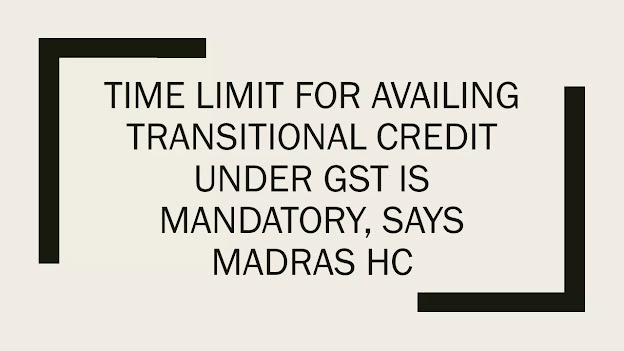 The Madras High Court has ruled that the time limit for availing transitional credit is mandatory and not directory. This is just opposite to the Delhi High Court’s order of May 5 which has been stayed by the Supreme Court.

However, there were some conditions set. The credit will be available only if returns for the last six months — from January 2017 to June 2017 — were filed in the previous regime (that is if VAT, excise and service tax returns had been filed).

And Form TRAN I (to be filed by registered persons under GST, may be registered or unregistered under the old regime) has to be filed by December 27, 2017, to carry forward the input tax credit. After many changes, the Government extended date for submission of the declaration electronically in required form by March 31, 2020.

Due to various reasons, a number of assessees who could not file the form by due date and were denied credit went to various High Courts. Here the petitioner PR Mani Electronics, a retail trader of mobile phones, electrical and electronic items, said it is entitled to avail Transitional Credit of nearly ₹4.70 lakh. Its application could not be filed electronically and then a hard copy was submitted to the tax authority which acknowledged it. However, after that there was no response.

The Court made a reference of Section 16(4) of the CGST Act which says, “A registered person shall not be entitled to take input tax credit in respect of any invoice or debit note for supply of goods or services or both after the due date of furnishing of the return under Section 39 for the month of September following the end of the financial year to which such invoice or debit note pertains or furnishing of the relevant annual return, whichever is earlier.”

It said this provision is indicative of the legislative intent to impose time limits for availing ITC. Besides, Section 19(3)(d) of the TNVAT Act itself imposed a time limit for availing ITC and further provided that it would lapse upon expiry of such time limit.

The Court said that ITC has been held to be a concession and not a vested right. In effect, it is a time limit relating to the availing of a concession or benefit. If construed as mandatory, the substantive rights of the assessees would be impacted; equally, if construed as directory, it would adversely impact the Government’s revenue interest, including the predictability thereof. “On weighing all the relevant factors, which may not be conclusive in isolation, in the balance, we conclude that the time limit is mandatory and not directory,” the court concluded and dismissed the petition.