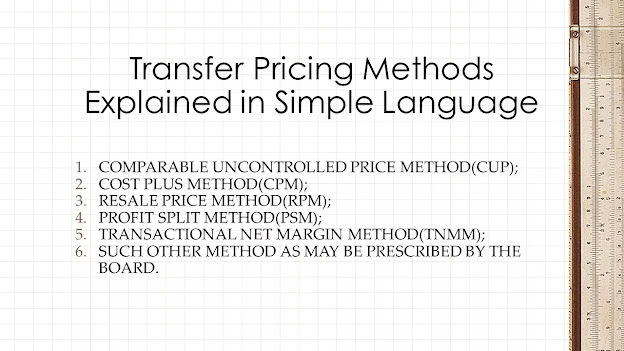 “Arm’s length price” is defined in section 92F(ii) to mean price which is applied or proposed to be applied in a transaction between persons other than associated enterprises in uncontrolled conditions.

Section 92C deals with the method for determining arm’s length price and the factors which are to be considered for applicability or non-applicability of a particular method to a given situation. The factors as well as methods incorporated in this section are not exhaustive and the CBDT may prescribe further factors and methods.

Section 92C(2) provides that the most appropriate method out of the above transfer pricing methods has to be applied for determination of arm’s length price, in the prescribed manner.

Accordingly, the Board has prescribed that the other method for determination of arm’s length price in relation to an international transaction shall be any method which takes into account the price which has been charged or paid, or would have been charged or paid, for the same or similar uncontrolled transaction, with or between non-associated enterprises, under similar circumstances, considering all the relevant facts.

A comparable uncontrolled price is the price agreed between unconnected parties for the transaction of goods or services under similar circumstances.

Steps to compute ALP based on CUP is as follows:

The comparable uncontrolled price method requires a high degree of comparability of products, services and functions and such comparability can be improved by carrying out necessary reasonable adjustments, in respect of differences arising on account of various factors such as quality of the product or service, contractual terms, credit terms, transport terms, level of the market (i.e. wholesale, retail, etc.), geographic market in which the transaction takes place, etc.

The Cost Plus Method (‘CPM’) determines an arm’s-length price by adding an appropriate gross profit margin to an associated entity’s costs of producing goods or services. The gross profit margin should reflect the functions performed by an entity and should include a return for capital used and risks assumed by the entity.

Steps to compute ALP based on CPM is as follows:

This method probably is most useful where semi-finished goods are sold between related parties, where related parties have concluded joint facility agreements or long-term buy-and-supply arrangements, or where the controlled transaction is the provision of services.

The resale price method (RPM) is a method which compares the gross margins (i.e. gross profit over sales) earned in transactions between related and unrelated parties for the determination of the ALP. The RPM requires high level of functional comparability and is mainly applicable where the controlled party is a distributor.

Steps to compute ALP based on RPM is as follows:

RPM is generally used to test transactions involving distribution function, i.e. when the tested party purchases products/ acquires services from related party and resells the same to independent parties. The use of RPM is appropriate where the reseller does not add substantially to the value of the product/ services. Where the transactions are not comparable in all ways and the differences have a material effect on price, one has to make adjustments to eliminate the effect of those differences. For this purpose, consideration of operating expenses associated with functions performed and risks assumed may be necessary, because differences in functions performed are often reflected in operating expenses.

Steps to compute ALP based on PSM is as follows:

Allocation of profits must be made in accordance with one of the following allocation methods:

Steps to compute ALP based on TNMM is as follows:

The various data which may possibly be used for comparability purposes under this method could be third party quotations, valuation reports, tender/Bid documents, documents relating to the negotiations, standard rate cards, commercial & economic business models; etc.

Want to know about Range Concept in Transfer Pricing with Examples,Click Here.